STC’s Summit 2021 is in the rearview mirror now, gone but not forgotten. Since there was an array of wonderful session choices, my article is based on my personal viewpoint, and totally opinionated. The good news is that I won’t throw any rotten tomatoes (even though there were a few presentations that deserved a toss).

Kudos to STC and Engagez

While we wanted to meet in person, this year’s Summit was all virtual. Therefore, my first mention goes to STC for using the Engagez platform. While there were some audio difficulties the first day, the overall platform was very accessible and intuitive.

The main menus were simple, and I easily learned about speakers and how to download their presentation slides. Navigation was easy during and after the Summit conference. By going to the Sessions tab, I was able to find all presentations with ease. Isn’t that what we look for in good web design? 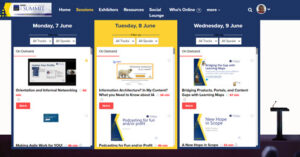 Design for Cognitive Bias: Using Mental Shortcuts for Good Instead of Evil

Presenter David Dylan Thomas created an impactful message for me, because Cognitive Bias is new territory. He changed my understanding of bias and how it applies to techcomm. His presentation was packed with many examples of how bias works and how we can frame information in a less-biased way. Thomas provided real-world examples to identify some harmful biases that frequently lead users to make bad decisions.

Some of the presentation terms and takeaways are outlined below:

For example: A seat belt campaign in Texas, Click it or Ticket, used rhyming to clearly communicate that tickets would be given to people not wearing their seat belts.

Thomas ended by asking, “How can we define our jobs to be more human to one another?”

No Money, No Design Skills, No Problem

Presenter Mike Parkinson is an infographic genius, and his presentations are always well-attended. In this session, he provided great ideas about creating infographics on a budget using free and inexpensive assets.

Parkinson contended that we live in an at-a-glance society. The most efficient way to communicate content and visualization is also the most challenging. To create complex graphics that tell a story, known as infographics, Parkinson asserts that you need to buy or build graphic assets.

There are two families of graphics:

There are three styles of design:

The following graphic is a visual example of design styles.

An audience reacts to a graphic, first aesthetically, and then intellectually. Material Design is the best approach for the average audience, because it’s not too glitzy, it’s not too cartoonish, it’s just right.

Parkinson contends that before building a graphic, the first phase is to design by:

Using key concepts, Parkinson demonstrated how to build a graphic for Eagle Solutions and 3 CleverKeys, an anti-fraud software company.

The second phase is to design by:

In the remainder of the presentation, he gave examples of the best types of graphics for visualizing concepts, and a demo of building graphics in PowerPoint with and without the Build-a-Graphic add-on. As usual, Parkinson successfully engaged his audience with great slides, smooth performance skills, and amazing demos and content. There’s always so much to learn, and I am grateful to have the slides to review and play with PowerPoint on my own.

At Summit, the were many fun virtual events:

However, the most fun I experienced was at the IDL SIG Social Event: Each of us is YOU-nique!

Attendees went on a scavenger hunt in their homes, and bringing back items they found, shared “finds” in the Zoom screen with us. People shared their stories of why the item was special to them, and we learned how each story was unique, but still part of the human fabric that binds us. Behind the scenes, SIG volunteers were surreptitiously spotlighting, learning about, and screen-grabbing photos of the attendees. After the event, a special scrapbook page was assembled and sent to each attendee who participated.

Note: There were many more presentations and events at Summit that were fantastic, and a personal favorite of mine: Tell Your Story the Disney Way, was presented by Lou Prosperi. Read Jamye Sagan’s article about Summit 2021 to see her reviews, including Lou Prosperi’s presentation.

Connect with us on Social Media

Click the icons below to open the IDL links